How much force can a trench cave-in impart on the human body? And what are the health effects?

When we think about the damage that a cave-in can do, we tend to think exclusively in terms of how much soil weighs and how hard it will press on the worker. It's a fairly simple calculation. Take the volume of soil that's fallen, multiply that by the soil weight, and there you have it. 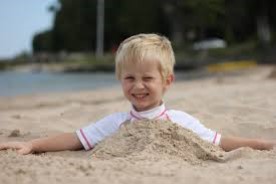 Being partially buried by loose sand is a beach-going tradition but not the same as being subjected to a cave-in.

But this analysis, although eye-opening, doesn't present a complete picture because it only looks at the forces present once the soil is laying on you. For example, take a look at the child in the picture. The sand was probably (hopefully) laid gently on him and force he experiences is only from the soil weight.

A Cave-in is More Than Just Burial

Now let's consider a worker subjected to a cave-in. Assume that one yard of dirt weighing perhaps 2,500 pounds, falls off a trench lip six feet overhead. It takes about 0.6 seconds for the dirt to fall six feet and we would expect it to reach a speed of about 20 feet per second or 14 miles per hour when it strikes the worker.

Next time you drive, notice how fast 14 mph is. Imagine the trauma you would suffer if you were struck by a ton of weight traveling at that speed. The result of the impact would probably be broken bones, stretched or broken ligaments, internal bleeding, and lacerated or punctured organs. Immediately following the impact, the soil surrounds and traps you. This combination of blunt force trauma and crushing weight is rarely survivable. Death may not be immediate but the processes that lead to death will have begun.

When you are squeezed the areas of the body being crushed lose circulation. As a result the tissues are deprived of oxygen and they begin to die and breakdown. As they breakdown they release myoglobin, potassium and phosphorus which essentially act as poisons. As long as the pressure on the victim is maintained, these substances may not be able to circulate and the patient will still be alive. When the pressure is released, however, one can expect major shock and organ failure.

This is the reason why rescuers often refer to cave-in victims as the "Grateful Dead." The victim is very grateful to get out of the trench but ends up dead the next day in spite of treatment.

The answer of course, is to follow the basic safety rules governing cave-in protection. And they aren't complicated but they need to be learned.