Q: What makes a one pulley more efficient than another?
A:There are a couple of key factors to this answer. The diameter of the sheave can make a difference – the smaller the diameter that more bending of the fibers of the rope, thus the promotion of added inefficiency. However, the greatest factor on efficiency of pulleys is directly related to the axial of the sheave(s). The axial of a low efficient pulleys is typically a bushing. A bushing type pulley will only give you approximately 70% efficiency. Whereas the axial of a high efficiency pulley is a ball bearing type. A ball bearing pulley will render an efficiency of approximately 90%. 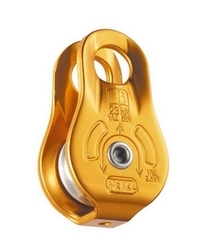 Q: What is a PMP (Prusik-Minding-Pulley)?
A: Prusiks are sometimes used as a progress capture (or ratchet prusik) on hauling systems. An efficient method of tending these ratchet prusiks is done by allowing the prusik to bump up against the tending pulley that is usually rigged at the anchor. The PMP (Prusik –Minding –Pulley) is manufactured with flat bottoms to the side plates, this keeps the prusik in line with the rope, promoting a smoother haul and more efficiency. Conversely, a round side plate pulley will let the prusik creep to the side of the pulley creating unwanted bending of the rope during the hauling process thus creating more friction and less efficiency.

Q: Can carabiners be used as pulleys?
A: Yes. We often use just carabiners for back-tie anchors to rig a non-hauling 3:1cd. However carabiners are not recommended for hauling a load because of the tremendous loss of efficiency due to the added friction. Carabiners used as pulley can cut efficiency down by 50%.

Q: Is the fire service required to use only pulleys rated to NFPA 1983 General Use?
A: It is important to understand that NFPA 1983 is not a user’s standard. It doesn’t tell you how to use rigging equipment. NFPA 1983 is an important manufacturer’s standard that promotes product accountability for the buyer of rope rescue gear. Having stated this, a General Use pulley will have a MBS (Minimum Breaking Strength) rating of 36kN, while a Technical Use pulley will have a MBS rating of 22kN.

The selection of rope rescue equipment, including pulleys, is strictly left up to each agency. Additionally, quality safety margins are greatly influenced by the expertise of those doing the rigging as well as environmental conditions presented to the rescue team.