Confined Space: When Air Testing Before Entry is Impractical

A client recently called me with a question about air testing. At his facility there was a confined space (a large vault) that they wanted to enter using alternate entry procedures (also known as reclassifying the space). Issues such as these are routinely addressed in our Confined Space Train the Trainer classes. 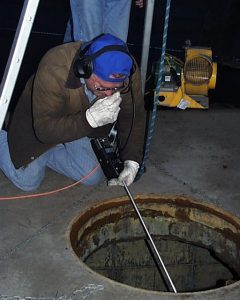 Checking the Air Before Entry

Over the years his crews had entered the vault many times and had never encountered a hazardous atmosphere, nor had work activities ever created one. They had the testing records to verify this. In addition, they had not identified any mechanisms (oxidation, decomposition, displacement, combustion, etc.) that might result in a hazardous atmosphere in that space, nor was the vault connected to other spaces which could introduce a hazard. So he asked the following question:

Can you enter a space to test the air to determine if it's safe to enter using alternate entry procedures? Or do you have to make an initial entry using all protections afforded by the confined space rules?

A simple answer would be, 'yes.' OSHA confined space rules state that you must test the air before entry. But due to the design of this particular vault, it isn't possible. You have to enter to test all the different sections of the vault. The result would be that the worker conducting the air testing would have to follow all the permit-required confined space rules until the testing revealed that the air was safe. If it was shown to be safe the space could be entered using alternate procedures.

Are there ways of checking the air throughout the space without entering?

This would depend on a number of factors, primarily the geometry of the confined space.

One possibility might be to develop a procedure for air testing without entering the vault. Using a ventilator of sufficient capacity to force air into the space (and extending the duct into the space as far as possible) should break up any possible stratification or pocketing of the atmosphere. Air being exhausted from the vault could be tested as it flowed out of the entry. Due to the mixing and churning, the air being exhausted should provide an accurate representation of the air in the space after ten minutes or so. (It might also be possible to drill sample holes or run sampling lines into the space to draw air from the farther reaches but this may not be practical depending on the design of the vault.)

Once the air testing showed that the atmosphere in the main body of the vault was safe, a worker equipped with a monitor could enter the vault and extend the duct further into the confined space to ensure that the purging and mixing of the air reaches all sections of the confined space. This process would require the following:

1) One or more calibrated and bump-tested monitors.

2) A ventilator of sufficient capacity with ducts of sufficent length.

4) A written procedure that includes an emergency action plan.

In any case you would be meeting the intent of the standard which is to ensure that any air breathed by workers is safe.

Can the employer simply declare that there is no possibility of a hazardous atmosphere and dispense with air testing altogether?

While the rules would allow the employer to make this determination, very few locations would go down that path. Air quality in the past is no guarantee of air quality in the future (but it does provide some indications). Plus, the employer had a policy of testing the air before entry into any enclosed areas of the facility, confined space or not. Creating exceptions to this rule would result in worker confusion and confusion compromises safety. It also seems odd that you would reduce worker protections simply to make it easier to comply with OSHA rules.

As an aside, in my experience as a trainer and consultant, it seems like confined spaces with the least possibility of hazards are the ones that generate the largest uncertainties. A hazard we can identify is usually relatively simple to deal with, and we can verify that it has been eliminated or controlled. But once we start dealing with 'possible' hazards the human imagination kicks in and we seem to be, to some extent, chasing shadows.

But the shadows have to be chased down and dealt with because if we are going to meet the intent, and not just the letter, of the standard, we have no choice.