Transporting Liquids: Watch Out for Slosh

Every load has unique characteristics that an operator needs to take into consideration before moving it. Transporting liquids offers a prime example. 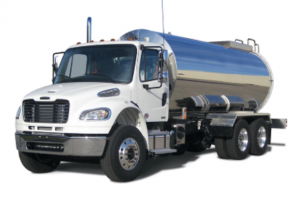 Recently a student in one of my classes illustrated this point. He used to operate a tanker truck and told the class that transporting liquid in a partially filled tank greatly changes the stopping characteristics of the vehicle.

How is that possible? A tanker truck might hold, say 4,000 gallons and water weighs about 8 pounds per gallon. If there is 2,000 gallons in my tank I would have 16,000 lbs. suddenly rushing from one end of the tank to the other which would generate a considerable force. 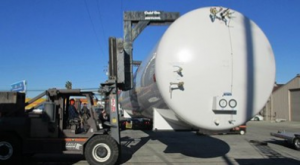 So, what does this have to do with forklifts? On occasion forklifts sometimes carry totes or tanks containing liquid. When a forklift picks up a tank it is usually perpendicular to the direction of travel which seemingly would mitigate the tendency to slosh back and forth but it increases the tendency for the liquid to slosh from side to side which increases the likelihood of a tip over.

Along with the motion of the tank, there may be a variety of other factors that contribute to the sloshing of the liquid such as rough terrain, sharp turns, hard braking, driving over objects, or crossing a railroad track at an angle (which is an OSHA requirement).

So, the next time you have to move a partially-filled tank, consider how the liquid might slosh during transport and how those dynamic forces can increase the chances of a tip over. Then look at your intended path of travel and operate your forklift in a manner and speed that minimizes the effect of the sloshing forces.

If you would like to share your experiences/photos of forklift incidents that can educate others on the principles of safe forklift operation please send them to: bhulberg@D2000safety.com

We will not publish company or individuals names.

Newsletters may or may not open automatically, depending on the web browser settings you are using.