Self-Retracting Lanyards: Can you anchor at your feet?

Fall protection equipment manufacturers are innovators. They are constantly developing new types of equipment and upgrading the capabilities of existing equipment. Self-retracting lanyards (SRLs or ‘yo-yos’) provide a great example of this innovation. (Trends in equipment design are an important aspect of our Fall Protection Competent Person classes. Click here for more information.) 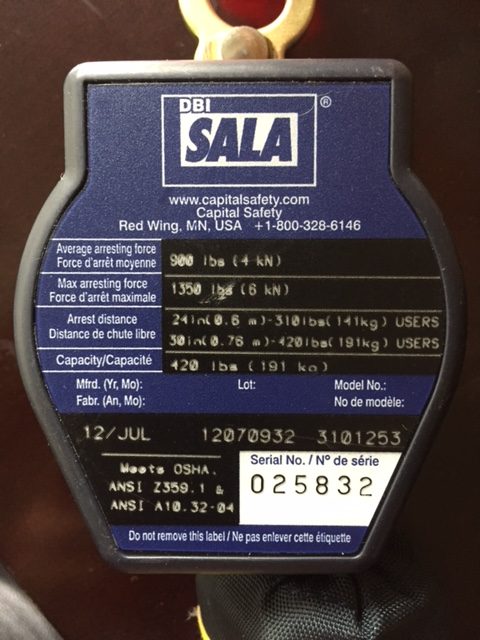 Legible labels on SRLs are essential to determine if they are the right for the job.

When self-retracting lanyards (SRL) were first invented decades ago, they were generally only used in a manner that restricted the freefall to two-feet or less. In other words, the SRL was anchored overhead. But as these devices became more popular, many employers began using them in a variety of ways which, in some cases, was outside of the manufacturer’s limits. An example would be using an SRL when working on a leading edge (a leading edge is an unprotected edge that is under construction which means that it is changing position as is it being built).

When you anchor the SRL back from a leading (or unprotected edge) and the worker falls you have two problems. First of all the freefall would be more than two feet (probably about five) and there's a chance the SRL would fail. Secondly, you would be dragging the lanyard over a potentially sharp edge and exposing it to cutting action especially in cases where there was a swing fall.

In response, the equipment manufacturers began to build additional classes of self-retracting lanyards. Currently the following types are available:

SRL-LEs can also be divided into:

In 2012 ANSI (the American National Standards Institute issued ANSI Z359.14-2012 that specified the design, construction, and testing of self-retracting lanyards. Among many other requirements they developed two distinct classes of SRLs.

The main difference between the two is the maximum deceleration distance. When close to lower levels or obstructions, a Class A device is used because it will stop you in less distance. Working at higher heights, Class B would be preferred.

Why not always use a Class A? The Class A limits the deceleration distance by increasing the average arrest forces by about 400 pounds. This places strain on the decorating worker.

How do I know what kind of Self-Retracting Lanyard (SRL) I have?

Take a close look at the label. All the information you need should be right there. If the label can’t be read, retire the equipment. In some case you can get new labels from the manufacturer.