1) A mainline (to raise or lower the patient/rescuer) and
2) A belay, or safety, line which will catch the load if the mainline fails.

Given that each rope is attached to the load and an anchor, at some point someone wondered if you could swap them out and switch between using a belay as a mainline and a mainline as a belay. In other words, could you keep both lines tensioned so that if one failed, the other line would prevent any appreciable freefall and associated shock loads? The answer is that you can, in theory anyway, and that was when the “Two Tension Rope System” (or “Mirrored System”) was born. Since then it has gained a degree of acceptance in the rescue rigging world.

If you would like to learn more about the various types of rope systems, we invite you to attend one of our Confined Space Rescue Team Leader classes.

The arguments for two tensioned rope systems went something like this:

So in principle the concept seemed to make sense, but what about in practice? 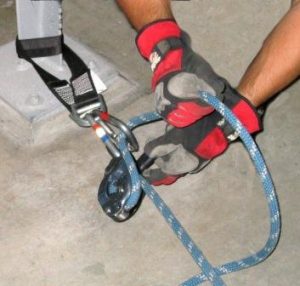 A Petzl I'D being used as a descender.

While training firefighters and industrial rescue teams across the country, two tension rope systems have been a hot topic. Proponents of these systems will argue that the latest descenders such as the CMC MPD and Petzl I'D are meant to function in these mirrored systems. If the mirrored system was operated exactly as designed we think they would have a point. However, in my experience I believe that it is extremely difficult (or even impossible) for two operators to control two separate descent devices at exactly the same speed. The same problem can occur when raising, although this is not as pronounced due to the auto locking (no human action needed) of the MPD and the Petzl ID during raising.

In almost every field trial, one operator tended to get ahead (or behind) of the other operator which meant that one rope was tensioned and the other had considerable slack. If the tensioned rope should fail with slack in the secondary rope the result is a freefall and shock loading the rigging (which can also occur when using a traditional belay that has slack in it).

What happens when the tensioned rope fails? We have conducted a number of demonstrations in our advanced rescue classes and each time the load will drop several feet in a best case scenario. Worst case is cratering the load.

Even if both ropes are sharing the load equally and one rope fails, the operator of the other rope suddenly goes from supporting half the load to supporting the entire load in a matter of micro-seconds which can pose a serious problem.

Over the years we have been able to trick very seasoned operators to drop a 200 or 400-pound test load 3 to 6 meters by failing the rope that had the majority of tension. The inability of the operator of the intact rope to instantly react to receiving 100% of the applied force was evident. Human reaction times cannot match the speed of gravity. So if the two ropes aren’t being let out or raised at exactly the same speed, then you lose all the advantages of a true mirrored system and you’re right back to where you started

Based on these tests, we believe that it is only a matter of time until a serious accident happens due to the limitation of a mirrored system. So what’s the right answer: two tensioned ropes or a mainline and belay?

Maybe neither. Maybe since we are asking how best to prevent falls we should be looking outside the rescue world to the tools and techniques used in industrial fall arrest systems. Self-retracting lifelines (SRLs or yo-yos) make excellent belay devices. Another option is using a vertical lifeline (tensioned with a weight on the bottom) and equipping the rescuer or patient with a Petzl ASAP or a Kong Backup. The biggest advantage of using these systems is that they don’t require an operator (which frees up some manpower) and they meet OSHA and ANSI requirements. The other advantage is that they work and can be equipped with shock absorbers which greatly lessen the shock loads on the rigging.

Every situation is different, as are the skills of various teams. While rope rescue with two tensioned ropes might have some application somewhere, I prefer rigging that is as simple as possible. Currently I believe that the simplest rigging is a reversible mainline (one that can lower and raise) in combination with a fall protection system that reflects fall protection regulations and best practices.