When you are asked the question: Is it worth having a confined space rescue team? Keep the following in mind.

Incipient: adjective
Definition: in an initial stage; beginning to happen or develop.

Common sense dictates that most employees should be able to respond appropriately to an incipient fire. Alarms and extinguishers have saved countless billions in damages and few would argue against spending money to ensure a safe and effective response in the few moments after a fire has started.

How does this principle relate to confined space rescue? (To learn more about this and similar issues, consider attending one of our upcoming rescue classes.)

Like structural fires, confined space emergencies are the result of a chain of events and if this chain can be broken early, lives can be saved. 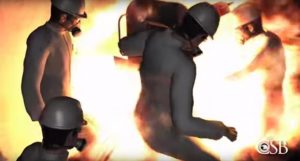 As illustrated in a Chemical Safety Board video, methyl ethyl ketone ignites deep in a penstock killing several workers.

The first link in this accident-causing chain is usually the occurrence of some unusual condition or event. Often the entrants respond to this upset situation by taking some action. For example, in the Georgetown, Colorado tragedy* (killing painters who were recoating a dam penstock with epoxy resins) the first event was clogging of the paint sprayers. The workers responded by bringing buckets of methyl ethyl ketone into the penstock to clean the nuzzles. Subsequently the enclosed work area became saturated with vapors and a random spark initiated the fire which killed several workers.

The company and contractor were cited for not having a confined space rescue team, but let's be honest here. Once the fire was ignited, any rescue team would have had an impossible situation on their hands (workers trapped by a raging fire deep in a mountain). This chain of events had to be addressed much earlier. In my opinion, the real value of a rescue team on that day would have been their refusal (hopefully) to permit workers to carry buckets of a volatile organic compound into a confined area. But no one was present to break the cause and effect chain. So the MEK went in and only one or two workers got out.

I guess in this analogy the buckets of MEK were a waste basket (incipient) fire and the rescue team members refusing to allow these buckets into the confined space would be the extinguishers.

We often hear from students who are confined space rescue team leaders at their facilities that they are being asked to justify the time and expense needed to maintain the team. They are told that many permit-required confined spaces can be entered under alternate entry methods and reclassified as non-permit spaces which means the employer does not have to provide confined space rescue. So why spend that money if it's not required?

To answer this question, I would offer the following points:

But every work location is different, as are the confined space rescue needs. If you need assistance in identifying the level of rescue your location might need, feel free to call us at: 800-551-8763.

* On October 2, 2007, five people were killed and three others injured when a fire erupted 1,000 feet underground in a tunnel at a hydroelectric power plant in Georgetown, Colorado, located approximately 45 miles west of Denver. The fatally injured workers were trapped deep underground during an operation to coat the inside of the tunnel with epoxy using highly flammable solvents. The tunnel is several thousand feet long and connects two reservoirs with electricity-generating turbines.